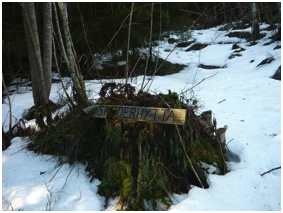 Last Saturday morning found me in a state of insatiable excitement and curiosity fordi jeg skulle går på tur sammen med Spiederen for første gang! I was filled with questions: What was going to happen? How would it differ from a Girl Guide camp? Soon, I would answer both of these and more.

There were already some differences before we even left the city. The concept of catching the bus to camp was new to me as, in Australia, we usually met at the campsite or, if there were enough people, we would charter a bus. Also, taking more than one meal’s worth of food for myself was new to me. This served to make things feel just that bit more adventurous than normal. Så spennende!

From the bus stop to the hytte was a trek almost half-way around Heivannet.

Having not expected a walk of that length over such varied terrain, I soon found that I had over-dressed and was sweltering by the time we reached our destination, the Spieder hytte. Not that I minded, because the scenery was amazing, the Spieder medlemer enthusiastic and the hytte charming. 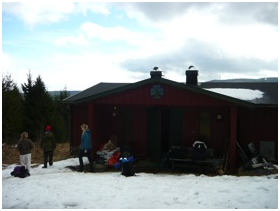 After dumping our bags outside the front of the hytte, we raised the Norwegian flag before settling ourselves in properly and eating one of our packed meals. But the break was short-lived. Soon, we were again på tur, a tur where we would “bare går, og ser hvor kommer vi”. 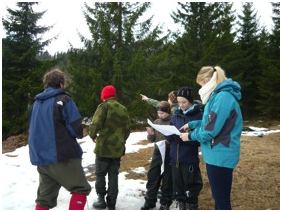 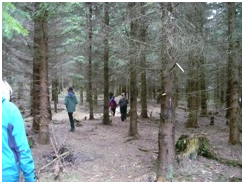 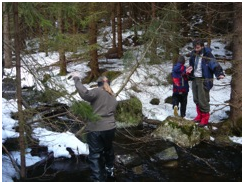 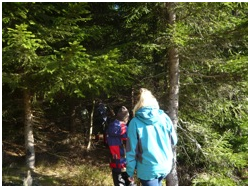 and past many sights, including old graves, 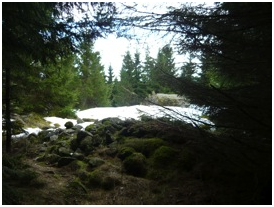 different kinds of fungi and lichen, 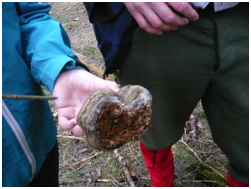 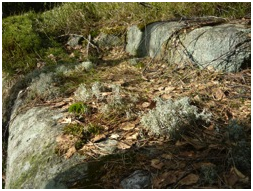 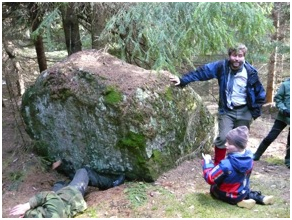 and different kinds of poo. 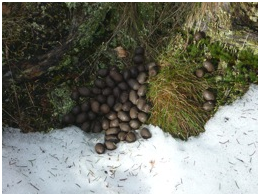 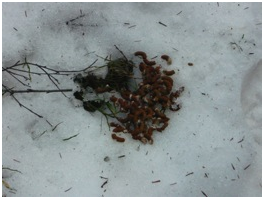 I found the tur to be much more focussed on the things around us than similar walks on Australian camps. I found it immensely interesting, and I felt that I learnt a lot.

Back at the hytte, which was welcomely warm because the wood oven had been left to burn since we had first arrived, we had a short debrief before playing some games and preparing dinner (the world’s camp staple: spaghetti bolognese). After dinner, the fireplace was lit and the Spieder showed the skits that they had prepared on the bus trips. I didn’t understand much, but the energy with which they were presented made it enjoyable to watch. We played some more games, 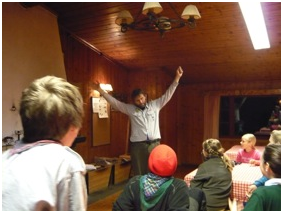 sang some songs, then went out for some star-gazing. This was the first time I had really had a chance to look at the night sky since I arrived in Norway and it felt very strange to not recognise any of the constellations apart from Orion (which was upside-down). I learnt to find the Bear and, from the Bear, find the North Star.

The next day, after breakfast (the second of our packed lunches), the Spieder were set an orienteering challenge. There were three stations, each with a different task. Inger and I held the first station, which was first aid. The scenario was that I had fallen from a tree and managed to cut my wrist badly and sprain my ankle. 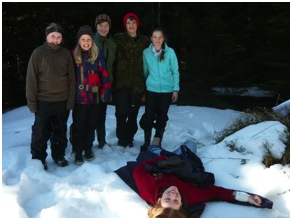 Although they had a little bit of trouble finding us (possibly due to all the false tracks I left in the snow), the Spieder were enthusiastic first-aiders with a steady torrent of small-talk, which gave me a good opportunity to practise norsk min. Then they prepared to find the second station, 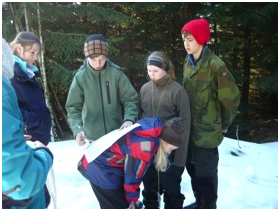 where they would have to find and identify different trees.

The third station was back at the hytte, where they displayed their knot-tying skills and then had to build a stand for the water basin. This last task was completely new to me and I watched with growing admiration as the five Spieder felled small trees 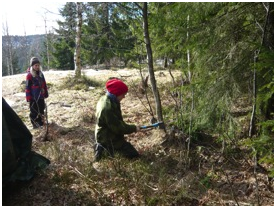 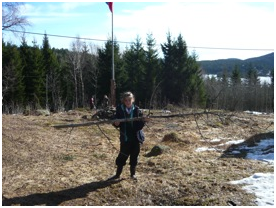 and prepared them into stakes with which to build this perfectly functional stand. 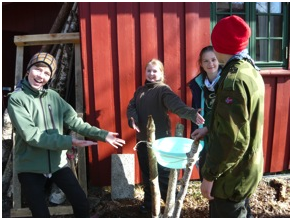 The group worked seamlessly, each with their own jobs and never getting in each other’s way. 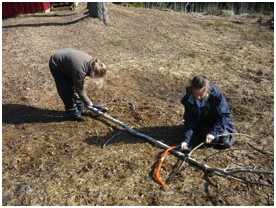 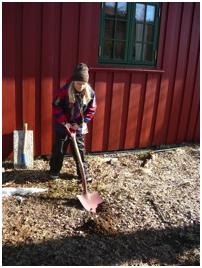 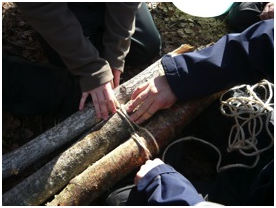 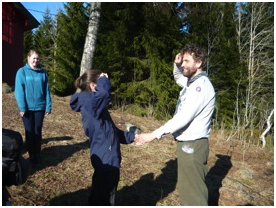 before taking it down, playing a final game of hide-and-seek and heading back around the lake to the bus stop, this time without boiling myself alive or slipping in the snow. Inspired by the tur the day before, I was able to ask more questions about my surroundings and so can now identify three different Norwegian trees: gran, furu and birch.

I was a bit sad when it was all over. I had seen a lot, I had learnt a lot and I had enjoyed every moment. I’m really looking forward to my next meeting with the Spieder, as they were all so wonderful. Tusen takk for turen, det var kjempegøy! 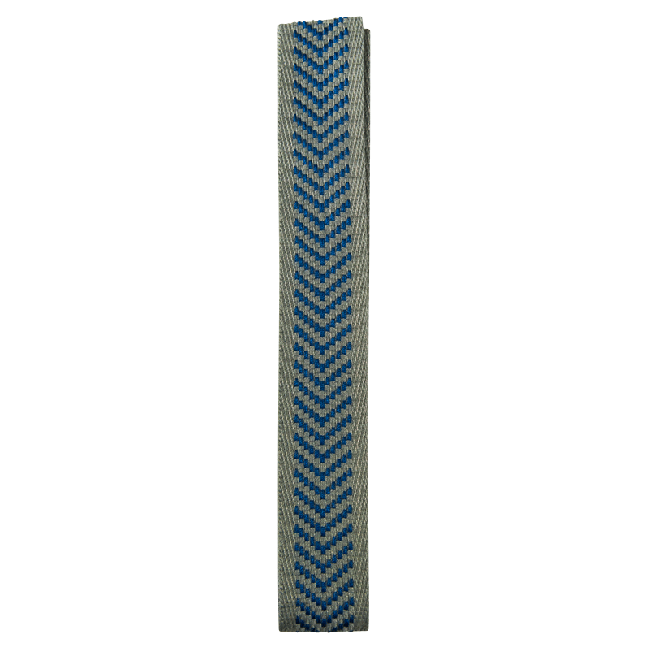 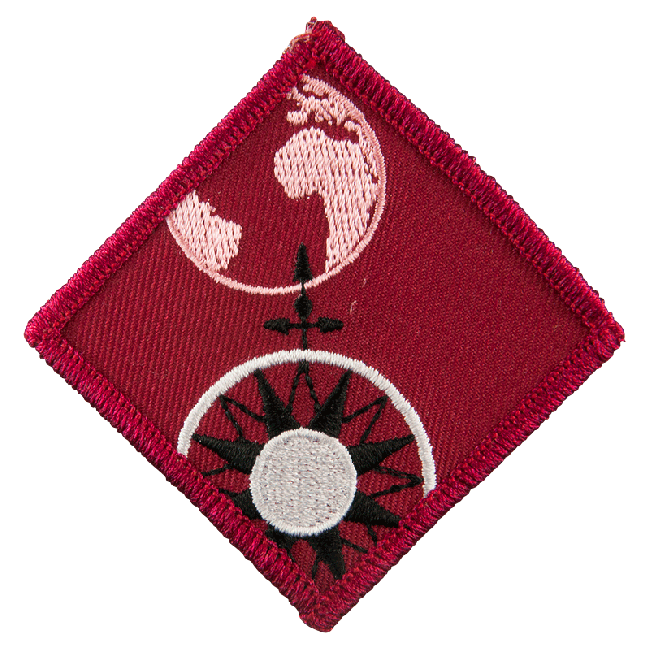 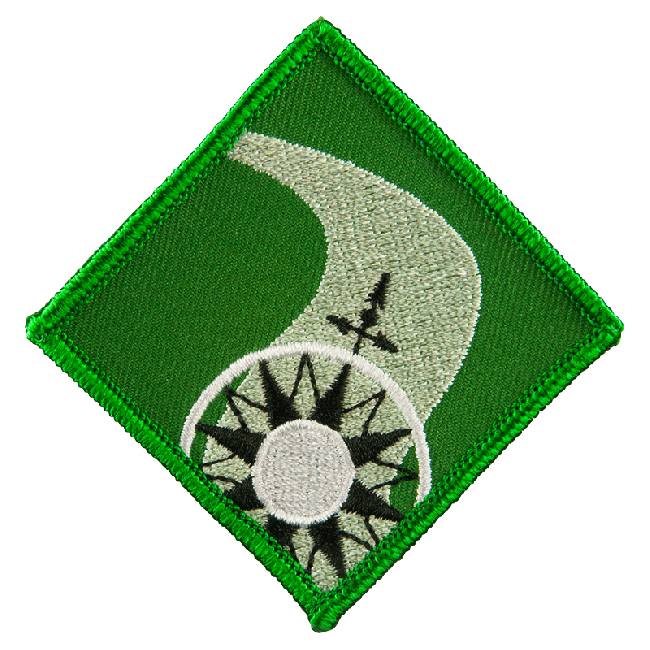